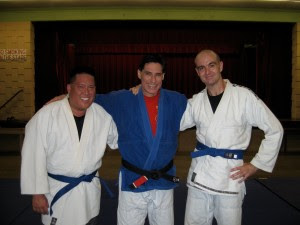 In March 2009, my training partner Jerry Chang and I earned Blue Belts in Brazilian Jiu-Jitsu from our instructor, Burton Richardson. And I'm not exaggerating when I say "earned." We prepared for several months by drilling, rolling, and going over techniques. The test itself consisted of several hard rounds of groundfighting. Jerry and I were very proud to have passed and to receive our Blue Belts from Burton. I was particularly happy, as when I first started training back in 2002, I really wasn't very comfortable on the ground. It took me around two years to feel even semi-competent grappling. But eventually things started to come together, and, with lots of hard work and dedication, my ground game began to improve.

Recently, both Jerry and I earned our third stripes on our belts. It was a long-time coming. During 2012, we were both sidelined by injuries ranging from sprained ankles and hyperextended elbows to herniated discs. Within a few months, we should be testing for our fourth stripes, and hopefully by the summertime we can go for our Purple Belts.

I look forward to my future Jiu-Jitsu training, and to constantly improving.

(Pictured: Jerry Chang, Burton Richardson, and Yours Truly)
Posted by Brandon at 8:59 AM