Today I'm launching a new feature: Recipe Wednesdays. Here and there I'll be posting some of my favorite recipes.

A few quick caveats...
Today's recipe is for Babe's Bocadillos. It comes via The 30 Minute Vegan's Taste of Europe by Mark Reinfeld. The 30 Minute Vegan series is one of my favorites, and are among the best vegan cookbooks available.

The bocadillos are a vegan version of a type of ham found in Spain.


1. Preheat oven to 400 degrees F.
2. Place all the ingredients except for the tofu on a baking sheet (I actually prefer a shallow casserole dish) and mix well.
3. Slice the tofu into cutlets. The original recipe calls for 12 thin cutlets, but I often cut the tofu into four or six big, thick slices.
4. Place the tofu on the baking sheet and let it sit a few minutes. Then flip the tofu, put the sheet in the oven, and cook for 20 minutes, flipping the tofu again midway through.

And that's it. Babe's Bocadillos are excellent on sandwiches, or as a bacon replacement for a tofu scramble. If you are of a Hawaii state of mind, they also can be used to make a veganized Spam musubi.
Posted by Brandon at 10:38 AM No comments:

Did you know October 4 is National Vodka Day in the U.S.? Me neither. Apparently it's some sort of bogus holiday that exists only for marketing purposes.


That being said, it seems as if post-Vodka Day is as good of a time as any to discuss Vodka Martinis, aka Vodkatinis, aka Kangaroos (really).

As I mentioned in an earlier post, I tend to prefer tradional, gin-based Martinis. However, sometimes I do opt for the vodka option. A Vodka Martini can be quite refreshing on really hot days, and it's a good choice to have with lighter fare, such as Japanese food.

When I make Martinis with gin, I use the following recipe: 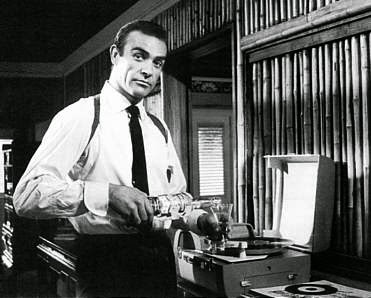 2 oz. gin
0.5 oz dry vermouth
A splash of orange bitters
Shaken over ice, served in a chilled cocktail glass with a twist of lemon

Alas, this recipe doesn't work too well if you are using vodka instead of gin. There's too much vermouth, and it will overwhelm the vodka. This is why many bartenders make Vodka Martinis with no vermouth at all. However, with no vermouth, the drink isn't really a Martini. I tend to go along with Esquire's suggestion of an 18 to 1 vodka to vermouth. So my recipe for a Vodka Martini ends up looking like this:

Email ThisBlogThis!Share to TwitterShare to FacebookShare to Pinterest
Labels: Wine and Spirits

More on Back to Basics Training

Yesterday I posted about taking my fitness routine back to the basics. I quickly got a few requests for details about exactly what sort of workouts I've been doing. Well, as James Bond once observed, the first rule of mass media is "Give the people what they want." So here's a snapshot of what I've been doing for the past couple of months training-wise...

Kettlebell Turkish Get-Ups: I was using a 20kg 'bell and doing about a dozen reps each side. A few weeks ago I moved up to the 53kg and have cut my reps down to three or four each side. I do single reps of TGUs, and do an easy set of Push-Ups in between reps. I'll do a TGU on my left, a few Push-Ups, a TGU on the right, a few more Push-Ups, and so on. By the way, doing Push-Ups and TGUs together makes my abs want to jump out of my body and run and hide.

After TGU's and Push-Ups, I move on to Pull-Ups and Push-Ups. For the Pull-Ups, I vary my grip on each set. My favorite grips are neutral grip (palms facing each other) and mix-matched grip (one palm facing me, one palm facing away from me). I seldom do more than 5 reps in a set. I usually do at least 50 Pull-Ups total, and do about a quarter of those wearing a 20lb. weight vest.

For Push-Ups, I aim for 100 total. I keep the number of reps per set around 7 to 10. As with Pull-Ups, I vary what type of Push-Ups I do. Mostly I do standard Push-Ups, but I also throw in Diamond Push-Ups, Hindu Push-Ups, and Push-Ups using the surprisingly effective Perfect Push-Up handles.

If I'm doing Goblet Squats, I do them on TGU day. I use a 44kg kettlebell and keep the numbers of sets and reps a bit low, because my legs have already gotten a workout from the TGUs. Plus, Goblet Squats are biomechanically a bit tricky for some one who is 6'3" with an inseam of about 36".

I do a Kettlebell Swing/Push-Up routine inspired by something I saw from coach Dan John. It's simple. Do 10 (or 15 or 20) Swings followed by 10 Push-Ups. Repeat the same number of Swings, but do 9 Push-Ups. Work your way down to just one Push-Up. Keep rests periods as short as possible. Right now I'm doing sets of 20 Swings with a 53kg 'bell, for a total of 200 Swings and 55 Push-Ups. When I'm done, I do 45 more Push-Ups to bring the total up to 100. (And no, I have not found that doing 100 Push-Ups a day six days a week leads to overtraining.)

After finishing my Push-Ups, I usually do a short core routine based on Dr. Stuart McGill's Big 3 Core Exercises.

I always start my workouts with a few minutes of meditation and some dynamic stretching. I always conclude with about 10 minutes of yoga based on the Eischens yoga sequence I learned at Monkey Bar Gym.

Posted by Brandon at 1:08 PM No comments: