Times are tough, and for many people, money is tight. But that doesn't mean we have to consign ourselves to a teetotaler lifestyle. There are enough booze bargains out there to help us through the recession, drink in hand.

Cava is a sparkling wine from Spain which has been called "the Spanish champagne," though only informally as the French are quite protective of the term champagne.

Some blends of Cava can be quite sweet, such as those designated Seco or Dulce, to dry, as in the Bruts and Extra Bruts.

One of my favorites is also one of the cheapest and most ubiquitous: Freixenet Cordon Negro. This is sold at countless supermarkets and liquor stores, and is easily recognizable by the stark black matte bottle. It's a Brut Cava, so it has a nice dryness to it. And, besides being very tasty, Freixenet Cordon Negro is incredibly cheap. I don't think I've ever seen it priced at more than $10 per bottle. 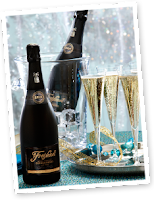 Obviously, Freixenet Cordon Negro isn't going to compete flavor-wise with real French champagnes (like my favorite, Moet Chandon Brut Imperial) costing 5-10 as much money. But not all of us can afford or even want to drink fine champagne on a regular basis. Cava, on the other hand, is wonderfully quaffable, and is the perfect sparkler for a warm evening. It's also a good choice for the holiday season. The Spanish would certainly agree, as they drink lots of Cava during this time of year, especially at Christmas dinner or New Year's Eve.
Posted by Brandon at 6:30 AM No comments: