Like so many modern trends, K-Cups and their ilk strike me as insanely expensive, and unnecessary.

How expensive? According to the New York Times, most single-serve coffee costs at least $50 per pound. That's about double the price of a really good whole bean coffee.


Throw in the price of the single-serve coffee maker itself, and you are spending some serious money. Why would someone opt to pay these crazy prices? From the Times article: “Americans under the age of 40 are thinking about coffee pricing in cups,” said Ric Rhinehart, executive director of the Specialty Coffee Association of America. “If you asked my mother how much coffee cost, she would have told you that the red can was $5.25 a pound and the blue can was $4.25. If you ask people in their 20s and 30s, they’ll say coffee is $1.75 to $3.75 a cup.”

I find it a bit disturbing that people now think of coffee as something that is prepared by others and served to them at an enormous mark-up. Don't misunderstand me: I love a good coffee shop. But I know that coffee shop coffee is a luxury. Plus, I actually do know how to make a decent cup of joe.

As you can guess, I do not use a single-serve coffee maker. I use the classic, tried-and-true pour-over or manual drip method.

This is my third Goth-related post (see my earlier posts on the Cure and the Crow) and it's about a serious topic applicable to many people, Goth or not.


I was inspired to write this by something shared on Facebook by the good folks at Gothic Volunteer Alliance (GVA)* of San Diego. The GVA is "an action league of individual volunteers who conduct humanitarian acts for the betterment of the local and global community." The organization has a sad origin:

The Gothic Volunteer Alliance (formerly Goth Help Us – San Diego; a part of the now defunct Goth Help Us International organization), was founded in October 2006 after the unfortunate, and unprovoked, brutal verbal and physical assault upon four Goths in a busy San Diego tourist area. The horrifying encounter left two of the four Goths with bruising and one requiring reconstructive surgery for orbital rim and socket fractures, a broken nose and dislocated jaw. What could have manifested as anger and hatred was instead channeled into the desire to undo the negative image that society and the media cast on the Gothic Subculture over the last several decades. From that, the San Diego Gothic volunteer base was formed.

Recently, GVA brought a  news story to my attention. It was about efforts by U.K. police to "note offences against Goths, emos and other groups as hate crimes, as they do already with crimes aimed at race, disability or sexual orientation. One report against Goths and others has been received every week since the recording began in April."

These efforts are part of a campaign launched by Sylvia Lancaster. Her daughter Sophie died after she was brutally attacked alongside her boyfriend simply because they were Goths. Sylvia Lancaster set up the Sophie Lancaster Foundation in her daughter's memory.

Sophie's story highlights a sad but true fact about the world: Those who are different, who are considered on the margins of society, are often victims of especially brutal violence.

Rory Miller, in his excellent book Meditations on Violence and elsewhere, describes the many forms of violent behavior. Miller is 17-year law enforcement veteran with a Bachelor's degree in Psychology.

Since I'm still in a post-Cure concert euphoria, I figure it's the perfect time to take a look at 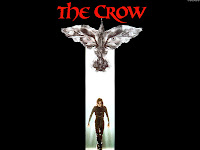 the Crow, both the film and the comic.

Lots of people love this movie. So do I, though with a bit of ambivalence. While it has some great scenes, a fantastic soundtrack, and a classic performance by the late Brandon Lee, I just felt the overall movie had some flaws in terms of the screenplay, and some of the departures from the source comic were ill-advised.

And to this day I find Stone Temple Pilot's "Big Empty" a great song to listen to on a rainy night, driving home from a hard evening of training.

While I may be ambivalent about the cinematic interpretation of the Crow, I  am not at all conflicted about my feelings for Jay O'Barr's original comic. I love it, and probably reread it at least once a year.

The comic is full of cultural touchstones that have a great deal of significance for me: the music of Joy Division and the Cure, French decadent poetry of Rimbaud, the general tone of a dark horror story. I love the fact that the Crow is modelled on Iggy Pop and Peter Murphy. And of course, there's swordplay and cats.

But what really makes the Crow's story so powerful are the twin themes of loss and rage.

Revisiting My Goth Days with the Cure

This post may seem a bit off topic, but hey, it's my blog! Plus, this will in a way lead to another post I'm working on about violence comitted against those on the margins of society.

I discovered the Cure around 1986, largely through the classic compilation "Standing on a Beach." It was revelatory. I had never really been into most of the standard Top 40 stuff played on American radio. Here was music that was exciting and alive and different. It was music a sensitive young man like myself could relate to. How could I not love a band that introduced me to Albert Camus?

The Cure served as a gateway to other bands: Bauhaus, Siouxsie and the Banshees, the Jesus and Mary Chain, Sisters of Mercy, Joy Division, etc. By the time I graduated high school, I had joined the ranks of the perpetually black clad, where I would remain for several years.

Both my musical and sartorial tastes would eventually expand, but my love for Goth music has never gone away, and it is still the musical subculture I most relate to.

This was reinforced on July 27, when the Cure played their first ever show in my hometown of Honolulu. It goes without saying that I was there in the audience.

I had seen the Cure previously in San Diego in 1992 during their "Wish" tour. It was the best concert I had ever been to, bar none. (Incidentally, I saw Peter Murphy around the same time. It was like Goth sensory overload!)

Some thoughts on the Honolulu concert…