My mom taught me many valuable things (such as standing up for myself, which helped save me from a would-be child molester). One of the the particularly useful skills she taught me when I was a child was self-hypnosis.

It may sound like I'm about to veer into Derek Flint territory, but there isn't anything particularly weird or mysterious about simple self-hypnosis, at least not the method I use.

Here are the basics:

That's it. Often, you are either deeply relaxed or asleep before you ever make it to your face and head.

I've found self-hypnosis particularly useful on nights I couldn't get to sleep and on long airplane trips. 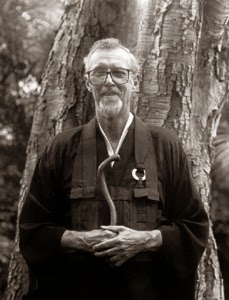 Where did my mom pick up this offbeat skill? I don't really know. She was an accomplished nurse, and accumulated all sorts of medical knowledge over the years. Self-hypnosis was probably just one of those things she picked up.

Zen breathing is sort of a cousin of self-hypnosis. It's also a rather fancy way of simply referring to the practice counting your breaths.

I was introduced to the concept in the works of Robert Aitken.  Aitken (1917 - 2010) was the master of the Diamond Sangha, a Zen Buddhist society he founded in Honolulu in 1959. He advocated the counting of breaths to people who were new to sesshin, or intense Zen meditation.

Let me be honest: I don't meditate as much as I should, and I don't use the exact breath count method Aitken recommends. However, I do find the basic principle useful.

Instead of counting to 10, I use a simple "one-two" method: Inhale ("one"), exhale ("two"), repeat. Since I'm, like, angry at numbers, this system works better for me, as—unlike Nigel Tufnel's amps—this one only goes to two.

I have found this simple meditative technique even more useful than self-hypnosis. I frequently use it to calm my thoughts and emotions. The first (and last and only) time I went skydiving, I counted my breaths to steel myself for the fact I was about to jump out of an airplane. When I had to do seven brutal rounds of sparring to earn my Jeet Kun Do instructor certification, I counted my breaths in between rounds to slow my breathing and control the adrenaline.

I don't claim to be an expert on self-hypnosis, Zen meditation, or breathing methods. However, I have found both of the techniques I discussed above to be very helpful in a variety of circumstances, and to have in general made my life a little bit better.
Posted by Brandon at 1:26 PM