There are two extremes of espionage fiction. On one hand, there is the glamorous, exciting, yet totally unrealistic world of Ian Fleming and James Bond. On the other, there is the believable, realistic, but occasionally dull realm of John LeCarré. Straddling the middle is Adam Hall (pen name for Elleston Trevor) and his flawed, vaguely neurotic spy Quiller.


Quiller a fascinating character. His creator describes him as "In his forties, he is as fit as an alley cat and his whole makeup is tense, edgy and bitten-eared." Unlike James Bond, he doesn't drink or smoke, nor does he engage in relentless womanizing. In fact, Quiller is quite respectful of women. In the words of Adam Hall... 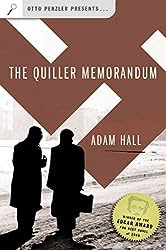 Nor is he macho, and this may explain why more than half the people who write me are women. In Murmansk, where Liz is applying Tiger Balm to our bruised and bloodied espion, she asks him if he doesn't find it irksome to have his wounds licked for him by a mere woman. He scarcely understands her. "Where else would a man go, but to the earth mother?"

And while Quiller had few possessions and little wealth, anything he had was to go to a shelter for battered women should he die on a mission. This was a cause close to the author's heart as well. According to Elleston Trevor's obitituary, "Late in life he took up the cause of battered women, campaigned vigorously for that, and was generous with money."

Quiller hardly every uses a gun, preferring to use his wits or martial arts skills. (The author of the series was well-versed in both Shotokan Karate and Aikido.) Quiller is also the type of individual who relies on herbs and traditional Asian massage to deal with injury and illness. At one point he even mentions he once traveled to Tibet to meditate.

Often referring to himself as a ferret, Quiller had an affinity for animals. To again quote Adam Hall...

Quiller is at home with wild animals. He feels a brother to them and knows their ways, their fears. What he calls "mission feel"— the sixth sense of the working executive — is closely related to the instincts of the animal. "Mission feel is never wrong," he says. "It's the instinct we develop as we go forward into the dark like an old fox sniffing the wind and catching the scent of things it has smelled before and learned to distrust. The forefoot is sensitive, poised and held still above the patch of unknown ground where the next flicker of a nerve can spring a trap."

Quiller seems to have a particular fondness for cats. (So do I, though in my case "particular fondness' is a massive understatement.) In one of the novels, he pauses in the middle of a mission to feed a stray kitten. Quiller contemplates adopting the kitten and taking it back to England. However, he realized that having a cat would spell the end of his spying career, as he would just want to stay home with the kitty. It's a melancholy moment, and one that shows the depths of Quiller's character.

So with Quiller you essentially have a tough, capable yet sensitive secret agent with some rather hippy-trippy, New Age tendencies. And that's exactly what makes him such an inspirational character to me. By far, he is the literary series spy I most relate to. I am way more Quiller-like than Bond-like.

A word of advice: It's best to read at least two or three of the books before passing judgement on the series. Hall has a very distinctive writing style, and the novels have a stream-of-consciousness quality that takes getting used to. Many people don't take to them at first, but come to love them.

You can learn more about this great series here.