I have quite a bit of fondness for Miami Vice, both the television show and the underrated big screen version. One of my favorite episodes of the original series is "Bushido," which for a change focused not on main characters Crockett and Tubbs (Don Johnson and Philip Michael Thomas) but on Lt. Martin Castillo (expertly played by Edward James Olmos), their mysterious, laconic boss. Despite being a man of few words, Castillo takes time to relate the following story to a young boy in his care: 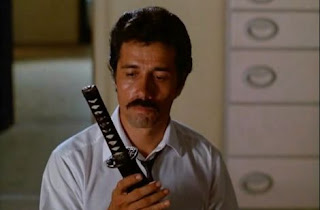 "There's a special story I'd like you to know. The story about the samurai, Toshin. Toshin was the greatest swordsman of his clan. And all the other samurai revered him very much. And the shogun became jealous. The shogun ordered Toshin to murder all the people of a little fishing village as a test of his loyalty. Toshin refused, of course, to do something so wrong. It would have destroyed his honor. 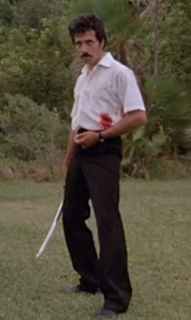 He became an outcast to his clan, which turned against him and he lived with the wild animals in the mountains with his family. The clan sent assassins to try to kill them all but none of them ever came back. Toshin knew that one day they would kill him and his family. That not even he could win all the time. That his time would come.

Finally, the clan sent his best friend. A man closer than a brother to him. It was this man's duty to obey the clan. Toshin came down off the mountains onto the beach to meet his old friend. They faced each other with drawn swords. They loved each other very much. As they both struck with their swords Toshin, the master, was a little quicker but he only touched his friend's neck. Touching it but not cutting it. His friend could not stop in time. He struck Toshin once, killing him. Toshin died in honor. It is the way of the bushido, the way of the warrior. Toshin knew that his family would now be safe. But his friend's heart was broken."

(Note: As far as I can tell, this story comes not from old Japan, but from the Miami Vice scriptwriters. It's pretty cool anyway. And "toshin" refers to a Japanese sword's blade without any mounting.
Posted by Brandon at 1:00 PM