If by some quirk of your taste buds you ever find yourself simultaneously craving both Japanese and Middle Eastern food, this recipe is for you.

Both miso and tahini have long culinary histories. Miso, a salty paste made from fermented soybeans, dates back at least to 6th century Japan, and earlier versions existed in China as far back as the 3rd century B.C. The origins of tahini, an oily paste derived from ground sesame seeds, are a bit unclear, though sesame has been cultivated in the Middle East for about 4,000 years.

Miso and tahini are also fantastically flexible foodstuffs. While miso often gets stuck in the soup ghetto, and tahini finds itself regulated to serving as a dip ingredient, they each can be used in a variety of dishes, such as this one.

There are actually quite a few variations of miso tahini sauces floating around. This recipe is a simplified version of one that originally appeared in Japanese Foods That Heal by John and Jan Belleme.

Cook the udon according to the instructions on the package. I normally don’t recommend adding oil to the cooking water when making pasta, but udon is very sticky so it might be a good idea to add a tablespoon of olive oil or sesame seed oil. Right before the udon is finished cooking, scoop out a cup of the water and set it aside. When the udon is done, drain and rinse in cold water.

To make the miso tahini sauce, place the miso, tahini, brown rice vinegar, mirin, and half of the udon cooking water in a large, microwave safe bowl and stir. Microwave the mixture on high for 30 seconds, stir again, and heat for another 30 seconds. Repeat this process until the sauce is all gooey. It shouldn’t take more than two minutes total. 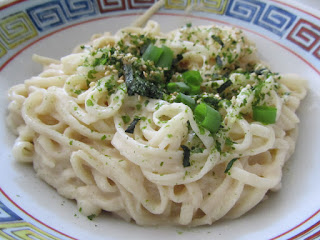 By the way, preparing the sauce in the microwave is just a suggestion. You can also prepare it in a pot on the stove, such as the pot you used to cook the udon. Just be careful not to overcook.

Add the cooked udon and the rest of the cooking water to the miso tahini mixture, and proceed to stir everything together. Serve immediately. To ramp up the Japanese side of this fusion dish, top with a generous sprinkle of furikake and green onion.

If you have leftovers (I rarely do), there is some good news and some bad news. The bad news is that miso tahini udon doesn’t always reheat well. The good news is it tastes really good cold.