I was very excited when I first heard about The Bourne Identity. The idea of an old-fashioned thriller directed by Doug Liman (who had already directed the excellent films Swingers and Go) and starring Matt Damon sounded very promising. And then I discovered that Damon would be training in the Filipino art of Kali for the role. That was just the icing on the cake!

While I had not trained in Kali myself at that point, I was very interested in the art based not only on what I had read but on some family history. My grandfather—a Marine saber champion—knew some Kali from his time fighting in the Pacific during World War II. He was taught by Filipino rebels working against Japan. Plus, the idea of swinging sticks around just sounded fun.

Doug Liman explained how Kali was more than just Bourne's fighting style. It came to define the character. 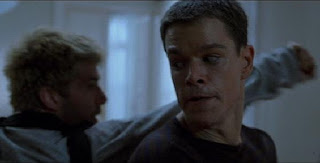 The martial arts actually ended up being the thing that helped us define Jason Bourne and his entire character. Right after Matt agreed to do the film, we arranged for demonstrations of different martial arts and Kali really inspired us. It is ridiculously efficient. You don't break a sweat or expend any energy, you use your opponents energy against him. And we thought - that's Jason Bourne, that's how he'll do everything in this movie. He'll figure out the simplest, least energetic, most efficient way to get something done. For example, when the cops surround his car, he's going to calmly pull out the map, browse through it and figure out a route before he starts driving.

(I respectfully disagree about the "you don't break a sweat or expend any energy" line!)

Then when I actually saw Matt Damon's Jason Bourne in action, I knew this was what I wanted to pursue. The mixture of Kali, Boxing, and Jeet Kune Do looked practical, efficient, and (I must admit) cool. After all, the fight scene in Bourne's Paris apartment is far and away my favorite fight scene in any film.

When I finally got serious about martial arts training, I specifically looked for a school that would incorporate some Filipino martial arts as part of the curriculum. I ended up finding Burton Richardson's JKD Unlimited and Battlefield Kali,  which utilized not only Kali but also kickboxing, grappling, etc. I started training with Burton back in 2002 and haven't looked back. Not only am I still a student of Burton's, but I'm one of his instructors as well.

And all in part because of Jason Bourne. No wonder I still sometimes listen to Moby's "Extreme Ways" on the way to train!

The Bourne Trilogy is inspiring in other, non-martial ways as well. The character of Jason Bourne is street smart, with excellent survival and tradecraft skills. He also knows a variety of languages. These are qualities worth having. Plus, both Bourne (and Bond) are partially responsible for my love of simple black jackets.

Also, the films have a moral and political complexity not usually found in a Hollywood action movie, which I appreciate.

Amazingly, the Bourne Trilogy maintained a high standard of quality throughout all three films. (The Damon-less The Bourne Legacy is an outlier.) The final movie, The Bourne Ultimatum, even managed to beat the dreaded three-peat curse and proved to be just as good as the first film.
Posted by Brandon at 1:17 PM