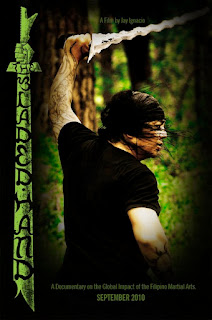 Last night I attended the Hawaii premiere of The Bladed Hand: The Global Impact of the Filipino Martial Arts at the Honolulu Art Academy. As a student and teacher of Kali, I may be biased, but I thought it was one of the best martial arts documentaries I have ever seen.

Here's a description of the film from producer Sonny Sison:

A documentary featuring numerous Filipino Martial Arts luminaries and established styles and systems propagating the growth of an indigenous form of self defense from the Philippines with historic and social contributions to the world at large including its influence from military and law enforcement training to Hollywood films and television.

The film took over two years to complete, and was a labor of love for director Jay Ignacio.

The Bladed Hand proceeded in a fairly chronological fashion, moving from the indigenous, pre-Spanish conquest roots of FMA to modern trends of the early and mid-20th century through FMAs increasing popularity in Hollywood and the international special forces community. 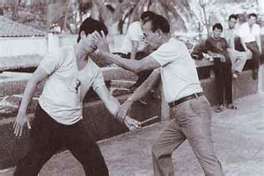 An obvious highlight of the movie was the great footage of important Grandmasters training and sparring. It was a real pleasure to see Antonio "Tatang" Ilustrisimo in his early 80s beating the crap out of guys a quarter his age. If I didn't already think FMA was incredibly cool, I would after seeing all of this footage, and if I didn't already train in FMA, I would immediately start.

Some of the most famous masters of FMA were highlighted in the film including Rodel Dagooc, Bert Labaniego, Daniel “Mumbakki” Foronda, Christopher 'Topher' Ricketts, and Dan Inosanto. I'm also pleased to note that my own instructor, Burton Richardson of Battlefield Kali, was also prominently featured.

Though I've trained in Filipino Martial Arts (FMA) for over 10 years and have read quite a bit about its history and lineage, there was still quite a bit in the film that was new to me. There were several Grandmasters profiled that I had never heard of. For example, I am embarrassed to say I was unfamiliar with the late Roland Dantes, a bodybuilder and martial artist who was quite well known in the Philippines and played a considerable role in the modern development of FMA. (He was also one big guy… sort of a Filipino Arnold Schwarzenegger.)

I think part of the reason The Bladed Hand is so successful as a documentary is because Jay Ignacio is not himself a practitioner of FMA. Why is this a good thing? Because it means he doesn’t have a stake in the endless (and needless) bickering and quarreling that seems to be part of the FMA community. Also, because Ignacio didn’t initially know very much about the subject, he has a legitimate curiosity and unbiased desire to learn that reflects in the film.

There was a touch of melancholy to the film that is worth noting. As the film points out, FMA is not particularly popular or well regarded in the Philippines. Most Filipinos who practice martial arts gravitate towards arts such as Karate or Tae Kwon Do. Why? Partially because those arts are far more structured than most FMA. (Plus they have neat uniforms and multicolored belts and things like that.) There also seems to be a class issue involved, as FMA is apparently deemed something only poor people do by many Filipinos. (There may be some truth to that: Despite being an incredibly important and influential martial artist and war hero, Antonio Ilustrisimo died poor and was buried in an unmarked grave.) 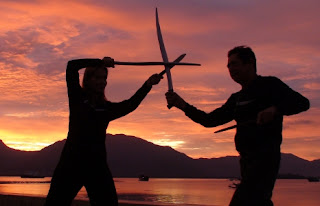 Because few Filipinos are interested in FMA, as the various Grandmasters die (and four died while The Bladed Hand was being made) no one is opting to carry on their legacies. Since most traditional FMA is passed on verbally and via teaching as opposed to through books, this means techniques developed over generations risk being lost forever. For better of for worse, the future of Filipino Martial Arts may very well lie in the hands of non-Filipinos.

Do I have any quibbles with the film? Nothing serious. I would have liked to see a bit more about FMA empty hand arts such as Panantukan and Dumog. And it would have been nice to include something about the influence of FMA on western boxing. But these are small complaints that no doubt reflect my own preferences and biases.


The Bladed Hand from ShowVIS LLC on Vimeo.
Posted by Brandon at 12:16 PM