When it comes to pasta—and Italian food in general—I have a strong preference for the dishes of Southern Italy. (Consider, for example, my love of spaghetti all'aglio, olio e peperoncino.) Conveniently, Southern Italian cuisine, with its holy trio of garlic, olive oil, and tomatoes, is also way easier to veganize than the more meat and dairy based staples of the North.

With summer now officially here, it's the perfect time for a zesty, tomatoey pasta, especially if you plan on spending time in the sun: tomatoes contain lycopene, which helps prevent UV damage to your skin. One of my favorites is penne arrabiata. This simple dish is especially popular in and around Rome. In Italian, "arrabiata" means "angry." Why is the sauce so angry? Because of all the peppers! Personally, peppers make me happy, not angry, but I suppose it would be a bit arrogant to change the name of penne arrabiata to penne contento.

My favorite recipe for penne arrabiata is based on one that originally appeared in an issue of Cook's Illustrated. I've simplified it a bit, making it a quick and tasty meal option. 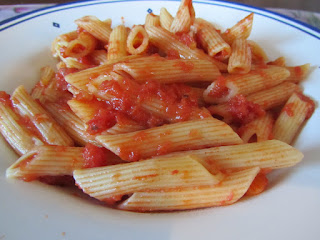 Cook the pasta until al dente ("to the tooth"). Pass the time with a nice Campari cocktail. Right before you drain the pasta scoop out half a cup of the cooking water and put it to the side.
In the same pot you used to cook the pasta, add the olive oil and reduce the heat to medium. Add the garlic and stir frequently for about two minutes. Add the pepper flakes, pepperoncini, and paprika. Continue to stir.

Add the canned tomatoes. Use an immersion blender to blend into a smooth sauce.

When the sauce starts to bubble, toss in the cooked penne and the pasta cooking water. Stir and toss until everything is hot and the penne is well-coated with sauce. Be careful not to overcook! Gooey, overcooked pasta is an insult to Italians everywhere.

Serve the pasta immediately topped with nutritional yeast to taste, fresh ground pepper, and perhaps a nice bottle of Citra Montepulciano d’Abruzzo, one of the world's tastiest inexpensive wines.

There are a few ways to tweak this recipe if you so desire. An easy one: more stuff! More garlic, more pepper, more oil... whatever you want. For a smokier flavor, use smoked paprika instead of regular paprika. Similarly, using fire-roasted tomatoes will give the sauce a bit of smokiness.

I often listen to one of the excellent Cafe del Mar chillout compilations when preparing and enjoying this dish. Granted, Cafe del Mar is based out of Ibiza, Spain, not Italy, but the mood still matches. There are more than 20 volumes in the series. My favorite is probably Cafe Del Mar - Volume 8, which features Goldfrapp, Dido, and Lamb, as well as this catchy, summery little tune by Afterlife.