Kali for the Corps 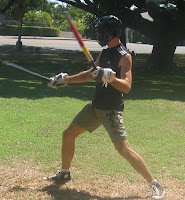 Among other things, I am a professional journalist. In summer of 2012, I was working at Hawaii Marine, the official newspaper of Marine Corps Base Hawaii. One afternoon, I was chatting with one of the editors and my martial arts training came up in the conversation. We talked a bit more, and I eventually ended up writing an article for the paper about how Filipino martial arts can be useful to modern service members, especially Marines. The article was entitled "Kali for the Corps," and alas, it is no longer available online. The original version is posted below.

Kali for the Corps

Say the words “martial arts” and most people will think of Bruce Lee, The Karate Kid, the most recent UFC bout, or the latest joke about Chuck Norris. They don’t tend to think of guys swinging sticks at each other or trying to slash an opponent with a training knife.

Yet the Filipino weapon art of Kali (sometimes called Arnis or Escrima) is a valuable system for a Marine or anyone else serious about learning practical combat skills. If you have any doubts about this, check out the 1999 USMC Close Combat Manual. The stick and knife techniques shown in Chapter 3, “Hand-Held Weapons,” are virtually identical to what you might learn in a Kali class. 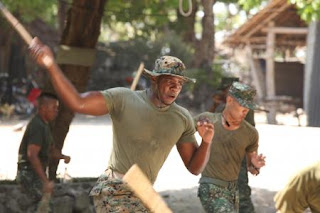 “The United States Marines have had a long history with the Filipino martial arts, even though it is not well known,” says Burton Richardson, founder of Battlefield Kali and Jeet Kun Do Unlimited. “Since the days of the Spanish American war, U.S. Marines serving in the Philippines were acquainted with and later many learned the ways of the Filipino bolo.”

While there are a variety of styles of Kali practiced in the Philippines, in general, the main focus is on fighting with sticks and blades. Unlike many Asian martial arts in which you learn empty hand techniques first and then move on to weapons, in Kali you start training with weapons right from the start. The reason for this simple: Kali originated as a war art. Battles between different villages and clans were common throughout Filipino history, and knowing how to win at armed hand-to-hand combat was simply a vital skill someone had to have to survive. 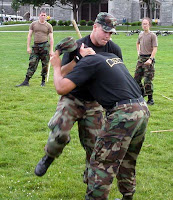 Kali has much to offer modern martial artists. While the chances of being involved in a straight-up stick fight or knife duel are slim, the skills developed in stick and knife sparring translate to unarmed fighting as well.

Consider, for example, footwork. Kali footwork uses a series of angles and indirect attacks that are easily applicable to boxing and kickboxing. Some have even argued that Muhammad Ali used some Kali footwork he picked up from Filipino boxer “Flash" Ellorde.

Speed is also a factor. You can swing a stick far faster than you can throw a punch. Because a stick is so quick, you have to improve your reaction time to avoid getting hit. If you do a few rounds of stick sparring and then do a few rounds of boxing immediately afterwards, chances are you’ll find that you are quicker and more alert.

Then there is the simple fact that, even a world of fighter jets, M16s, and other highly efficient modern weaponry, there is still a place for such seemingly primitive weapons such as sticks and knives. It is also not uncommon to find sticks and knives in the hands of street criminals. Granted, the sticks will probably not be the rattan “bastons” Kali practitioners use. The stick may take the form of a baseball bat, pool cue, or even an antenna ripped off a car in a parking lot. (It does happen!) As for blades, thugs carry everything from wannabe Rambo knives to straight razors to box cutters to switchblades. In Kali, you will learn how to fight stick vs. stick, blade vs. blade, stick vs. blade, and how to deal with an armed opponent when you don’t have a weapon yourself. 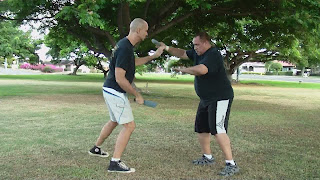 Even on the modern day battlefields of the Middle East, Kali can prove useful. “Today, functional training (emphasis on sparring) of Kali, Eskrima, and Arnis is very valuable for our troops, especially functional knife defense,” says Burton Richardson. “The Philippines has been a knife culture for centuries, and the techniques and tactics for dealing with the blade have been proven over and over again in combat. If a blade is pulled in close proximity, a Marine or soldier will not have time to get to his firearm, and so must be able to first deal with the knife threat empty handed. I ensure that all military personnel that I train become highly proficient in blade defense, and I am happy to report that our students have prevailed in a few blade attacks in Iraq and Afghanistan. The functional training saved them.”

Thanks to Hollywood, Kali has enjoyed a bit of a revival in the U.S. recently. Films such as Hannah, The Hunted, and Mission: Impossible 3 have featured the art. Perhaps most famously, Kali is the main fighting style of Matt Damon’s Jason Bourne of the Bourne Trilogy.